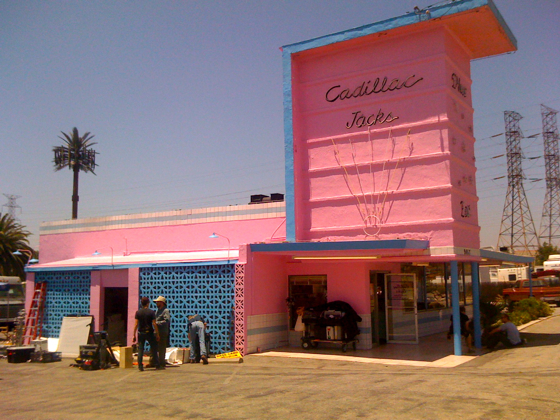 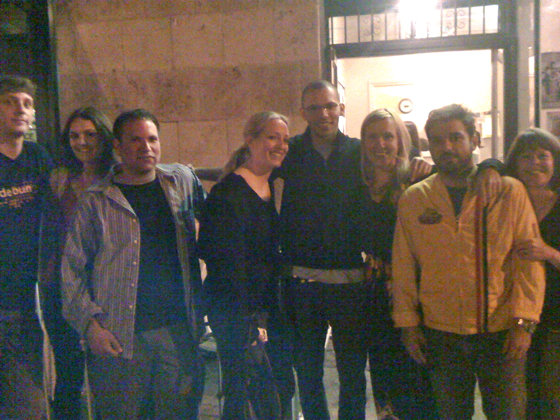 When it comes to writing, I’m usually a perfectionist. I pore over my words, check its cadence, and double-check its grammatical correctness. Perfectionism has its place, but it also has its price. It is this perfectionism that often stands between me and self-expression. Over the last year, there are many things that I have wanted to write about — but which I haven’t — because I didn’t have the time to craft a post that I felt that I would be happy with.

My upcoming summer storytelling internship in Los Angeles is about being driven by my emotions, rather than my intellect. It’s about passion over strategy. And so with this internship, and this blog, I will experiment with a different approach. I vow to prize quantity over quality. I vow to prize content over beauty. I will make mistakes. I will stay stupid things. But in the spirit of my journey it’s about going with a feeling, putting myself out there, and seeing what happens.

I hope you’ll join me as I embark on a cross-country journey to Los Angeles to try my hand at storytelling. I’ve included my original blog post – below — which describes the journey that’s gotten me here. Now it’s about making it real.

Three judges from Xerox, Cisco, and HubSpot. Eight contestants from MIT Sloan and Harvard Business School. And a surprise appearance by one John Coleman.

A big thanks to all those who helped to bring this week’s Bold Sell Competition to life, including our volunteers, judges, contestants, and the over 200 people who attended the event. Congrats also to our three winners: Slava Menn (MIT – 3rd place); Chika Ekeji (MIT – 2nd place); and William Collis (Harvard – 1st place).

If you’d like to play an active role in organizing next year’s competition, or would like to bring The Bold Sell to your school or organization, do let us know. For video of all our winners, click here.

Three judges from Xerox, Cisco, and HubSpot. Eight contestants from MIT Sloan and Harvard Business School. And a surprise appearance by one John Coleman.

A big thanks to all those who brought this week’s Bold Sell Competition to life, including our volunteers, judges, contestants, and the over 200 people who attended the event. Congrats also to our three winners: Slava Menn (MIT – 3rd place); Chika Ekeji (MIT – 2nd place); and William Collis (Harvard – 1st place).

Without further ado, presenting video of the top three winners of The Bold Sell competition.

In last Fall’s Basic Sales Training Workshop, renowned sales guru Jeff Hoffman described sales as based on the principle of “creating a sense of urgency where none exists.” That urgency, Jeff stated, is created by the seller and instilled in the buyer. Fair enough. As kids, however, we learned another important principle: “If you can’t take it, don’t dish it out.” And so, on March 3rd, we put our finest orators on call and create for them an urgent condition. Cue the Bold Sell Competition.

In a first-ever collaboration between the MIT Sloan Sales Club and the Harvard Business School Public Speaking Club, our two schools join forces to test – and celebrate – our most creative, witty, and captivating MBAs. The premise is simple: 1 product, 6 slides, 7 minutes, and an eager audience packing Wong Auditorium. Your challenge? Sell a product like it’s the next coming of sliced bread. The catch? You don’t know what product you’re selling, nor do you know what’s on your slides, until you’re standing in front of your audience. And one more thing: your performance will be scored by sales execs from Cisco, AOL, Xerox, and Hubspot. Go.

The Bold Sell Competition will be held on Wednesday March 3rd at 7pm in MIT Sloan’s Wong Auditorium. Our goal is to laugh, listen, and celebrate those brave enough to step into the spotlight, so bring your friends and join us to cheer on our fellow MBAs (Admission is free).

Here’s to laughter, creativity, community, and sales. See you in Wong. 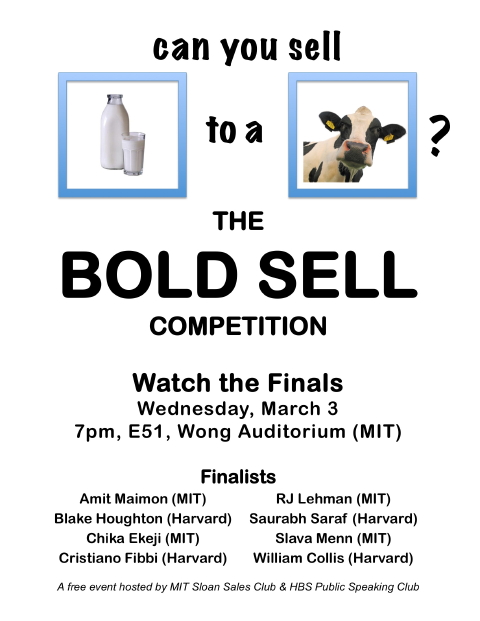 The quest for freedom is insatiable.

Two men circled the Earth in this small capsule fo

The president is coming. 🇺🇸

The Art of Travel