Yesterday was an absolutely incredible day in Detroit, thanks in large part to Tyree, founder of the Heidelberg project and incredible ambassador to his neighborhood. Besides a very moving interview with Tyree himself, I was lucky to be able to interview:
– John and Magnola, retired auto workers who moved to Detroit after growing up in the South
– Tishan, a highschool grad (as of yesterday) who is following his passion of culinary arts
– Lisa, a Native American and successful optician who traded it all in for a career in fine arts, with a focus on metal smithing

On my drive from Buffalo to Detroit I thought a lot about the focus of my project, and I’ve decided to shift it from stories of American values, to stories of people who have taken big risks to follow their passions. I like this subject better because it’s inherently personal, and it’s relevant to my own journey. My day in Detroit was a field test of this topic and I’m very happy with the results.

Now, on to South Haven MI for a little R&R with my good friend Matt, and on Sunday off to Chicago. Here we go- 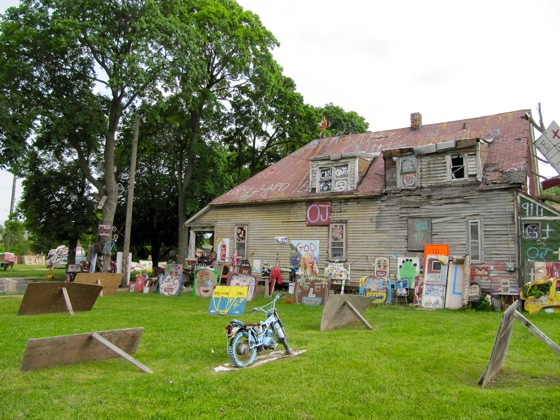 On Tuesday I had an inspirational call with Derrick Ashong (aka DNA), a West-African born musician, social entrepreneur, and host of The Derrick Ashong Experience on Oprah Radio.

Derrick inspires me for two reasons: First: he has guts. With the prospect of a lucrative career on Wall Street, Derrick (at the time a senior at Harvard) had the courage to strike a risky path for himself and co-founded Soulfège, a West African band with beats as catchy as their message is positive. Second: he pays the rent. Through speeches, performances, consulting gigs, and his radio show, he has designed a career that enables him to express himself artistically yet also supports him financially.

Derrick had the following words of wisdom regarding my storytelling project:
– On growing my network: It’s not about who you know, it’s about who knows what you know. Tell people what I’m working on.
– On finding a mentor: A mentor will want to work with me because they care about me deeply, or they respect my work. The most efficient way for me to find a mentor is to go out to venues and perform (a.k.a Just Do It).
– On the art scene in LA: Some of the most talented folks in LA’s art scene are artists who most people have never heard of. Seek them out.
– On where to perform: Start with Zanzibar in Santa Monica.

I’m excited to track Derrick’s pragmatic approach to building a career of self-expression, and I hope that I can channel his courage and discipline as I build my own.